About this Consulate General

How to get here?

How to get here? 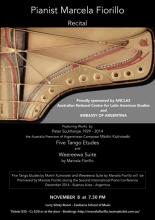 After the great success of the Concert “ Sounding Brazil” Piano Recital, honouring Brazilian Composers at the auditorium of the Embassy of Brazil in August 2014, Marcela Fiorillo returns to the stage at the ANU School of Music on Saturday, November 8 at 7.30pm.

The program will feature works by Peter Sculthorpe one of the greatest Australian Composers, the Australian Premiere of ” Five Tango Etudes” by Argentinean Composer Martin Kutnowski. These etudes contain many of the idiomatic gestures that belong both to the old and new Tango traditions. The Program will also include Marcela’s latest composition the “Weereewa Suite” - a rich musical journey celebrating the magnificence of the Weereewa Lake, its landscape and native spirit.The piece, commissioned by the Festival of Lake George Committee, was premiered in March 2014 with a great success of audience and reviews.
Away from Australia, Marcela’s presentation of “Five Tango Etudes “ by Martin Kutnowski and her own “Weereewa Suite” will be premiered during the Second International Piano Conference in December, Buenos Aires, Argentina.

This Concert is proudly sponsored by Australian National Centre of Latin American Studies and the Embassy of Argentina.